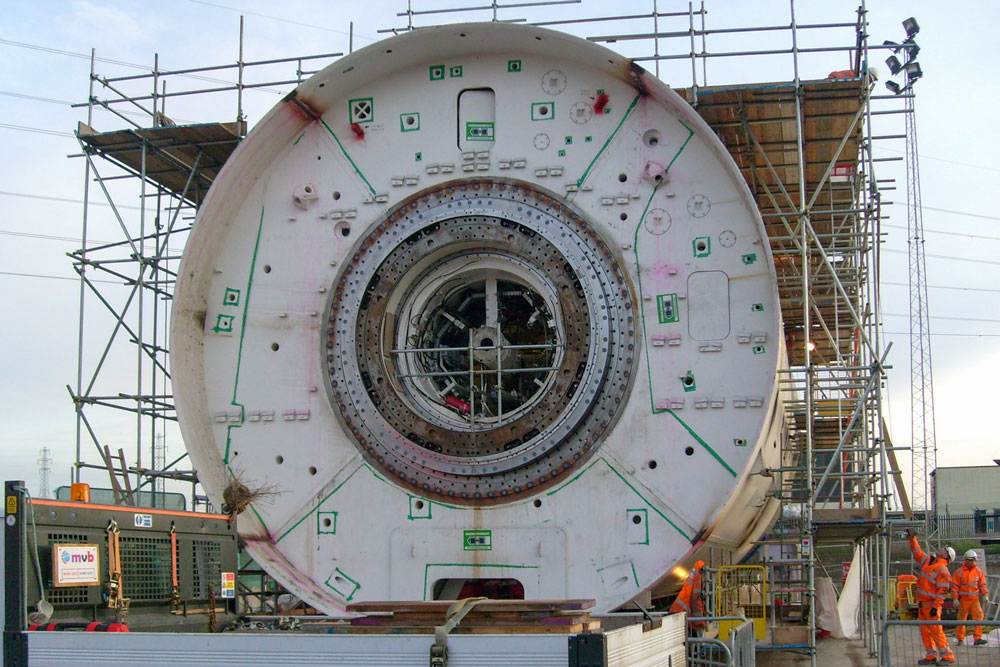 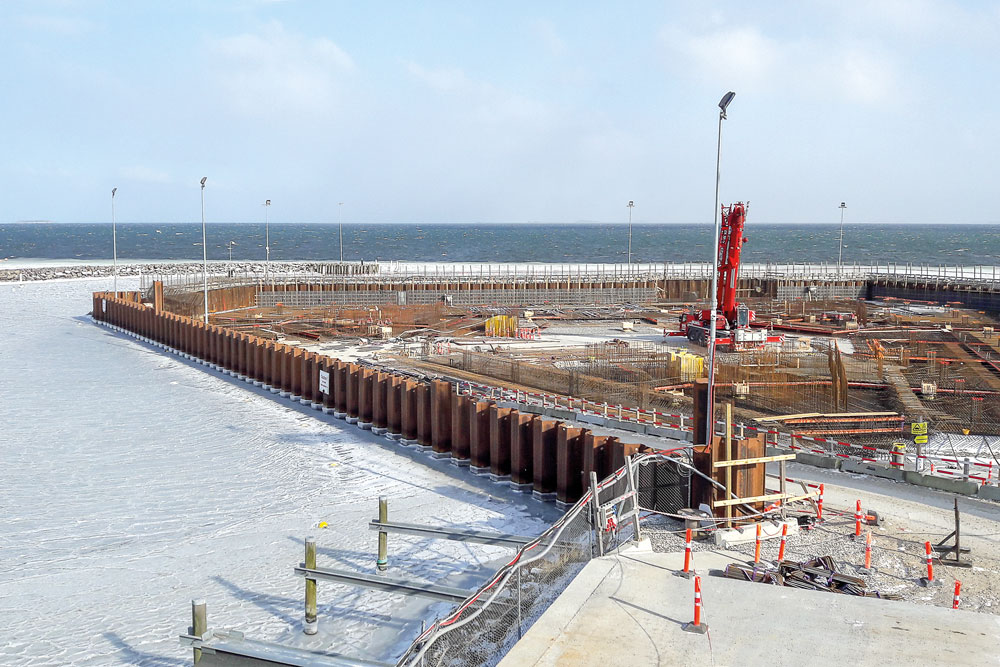 Drytech has designed a special waterproof pump shaft that allows companies to create pumping points inside the bed.

The wells are made in the Bedano workshop, in Switzerland, and shipped to the construction site, wherever it is in the world, where they are prepared by the Drytech technician.

This is the case of the construction site opened directly in the North Sea, where 36 pump wells were installed, subsequently sealed and incorporated into the bed.

Once its function is exhausted, the Drytech pump well is waterproofed both externally and internally.

Once the casting is complete, the joint between the well and the bed is injected with DRYflex expansive resin, which seals the element by pressure, wrapping around the entire thickness of the bed.

Any water flows inside the well are instead rendered harmless by the lid sealed with gaskets both on the circumference of the well and on each of the sealing bolts.

The use of the Drytech System resulted in a saving of several weeks on the time required for the construction of the waterproof basement. 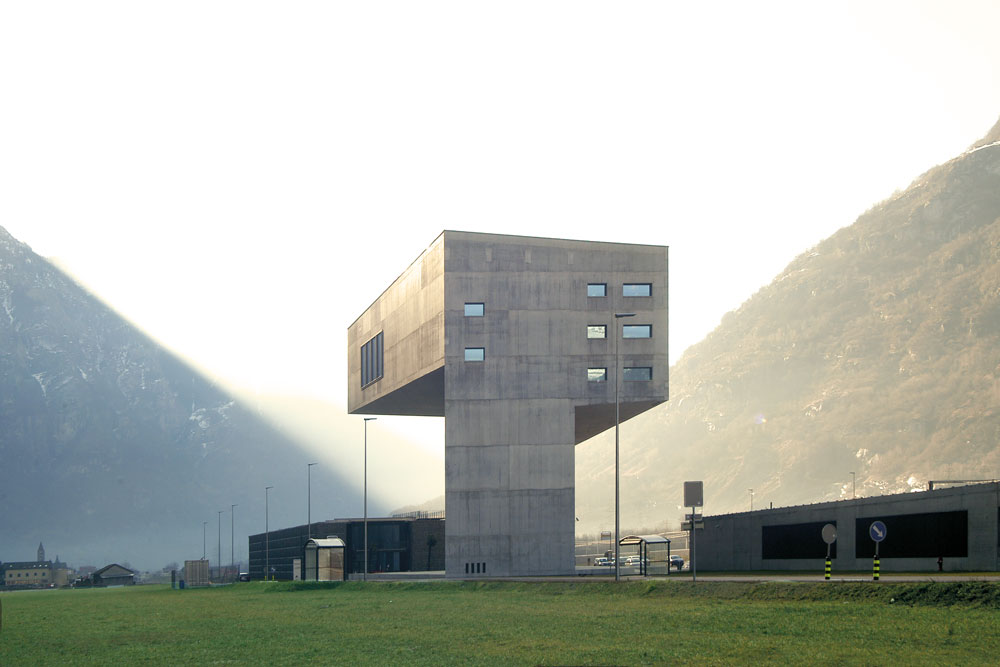 The Polleggio Operation Center manages the railway traffic of the Gotthard and Monte Ceneri base tunnels.

Known as “The Periscope” for its futuristic architecture, the POC is one of the four SBB operating centers in Switzerland, together with the ultra-modern centers of Lausanne, Olten, Zurich.

Height and shape of the building are the architectural response to two functional constraints.

The POC marks and declares the entrance to the Gotthard base tunnel. It is a symbol.

To be perceived as such by the railway and the motorway it was developed in height.

The second constraint is the dimensional incompatibility between the control room and the type of an office building, which has led to accepting the contrast and expressing it in a radical way. Thus, the double-height slab of the control room is grafted onto a trunk of office space, arranged diagonally on the lot.

The POC therefore appears as a sculptural object animated by a twist between the two volumes.

Seen from a moving vehicle it transforms, changing its proportions and offering different states of balance. 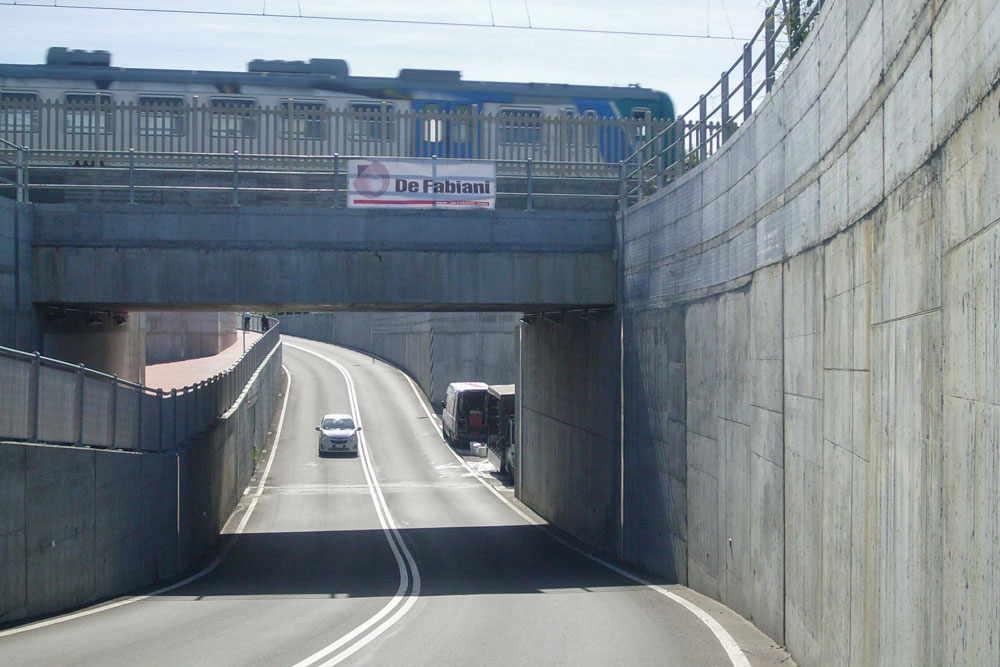 The railway underpass of Indipendenza street in Crema allows the passage of a road and a cycle path under the railway path. The work was carried out without interrupting the overlying passage of the trains.

The Drytech Tank made it possible to prefabricate the monolith near the tracks and push it to its final location with an excavation that gradually replaced it for the ground supporting the railway line.

Once positioned in place, the monolith was waterproofed in its critical points (cracks and joints) with DRYflex expanding resin injections.

Made ex-post, the waterproofing did not risk being damaged during the launching operations.

The expansion joints were prepared with DRYset injectable waterstop tapes. 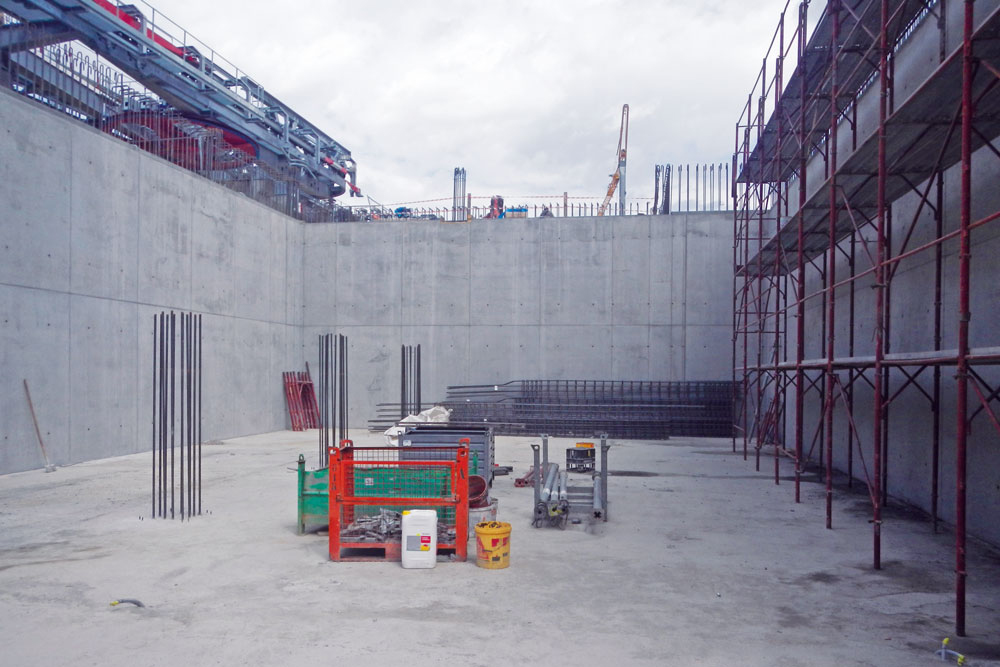 Close to the Carosello 3000 station in Livigno Drytech has built the new 5,600 m³ water tank, which will feed the cannons for artificial snow.

The work, built in 5 months with a 2’175 m² Drytech Tank, is completely underground to have no impact on the Alpine panorama.

Drytech Engineering has formulated a waterproof concrete suitable for environmental conditions, based on the characteristics of the aggregates present in the plant chosen by the Edil Dona company in Valdisotto, Sondrio.

The acrylic resin DRYflex, which waterproofs the details by pressure, is certified for use in structures in contact with drinking water, so it is safe for the environment and therefore perfectly suitable for use in a tank that feeds the guns of snow.

One of the main acceleration factors on the construction site is the control of shrinkage cracking.
In fact, the Drytech tank allows you to make continuous castings (the bed was cast in a single solution) because the cracks are induced by the Cracking Elements, which can also act as disposable formwork. 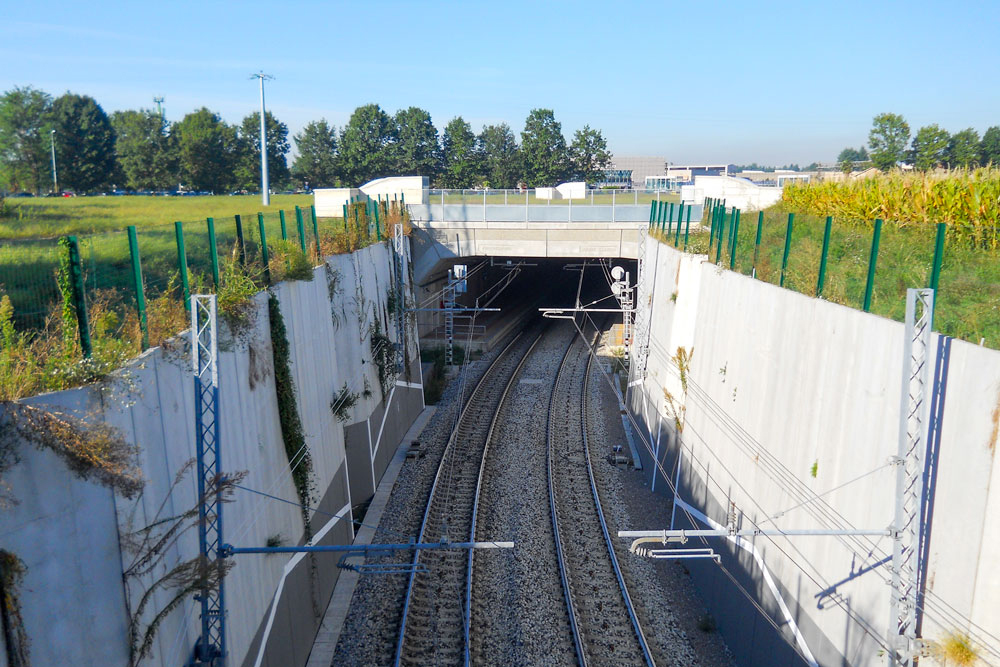 Then the excavation and casting of the Drytech waterproof concrete slab was carried out, resting on the bulkheads and prepared with the DRYset crack control elements. The whole operation took place in just three days, at the end of which the track was restored.

The procedure was therefore repeated on the other track. After another three days the line returned to full capacity, with both tracks open.

The excavation was then carried out under the slab, the casting of the platform floor of the underpass and finally the lining casting, directly against the micropiles.

When the concrete matured, joints, holes and programmed cracks were injected with DRYflex resin which, expanding, sealed them by pressure.

Drytech Engineering provided advice on aspects relating to waterproofing, collaborating with the structural engineer already in the design phase of the underpass. 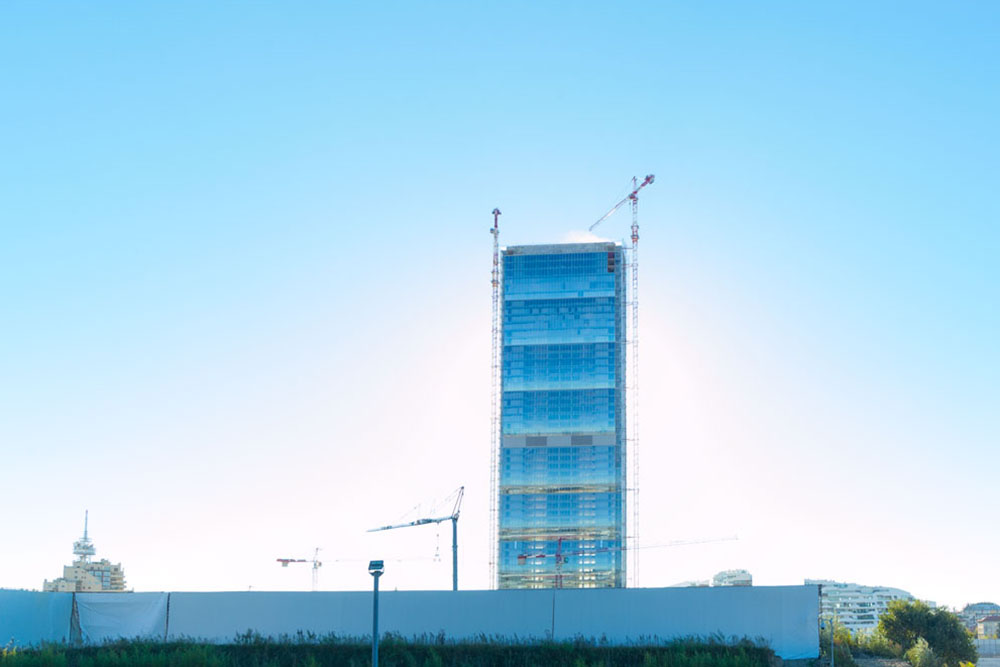 The Isozaki Tower, inspired by Constantin Brancusi’s endless column, has become one of the symbols of the city. Designed by the Japanese architect Arada Isozaki together with the Italian architect Andrea Maffei, the skyscraper is the headquarters of Allianz in Italy.

The building, which can accommodate up to 3,800 people, is the tallest skyscraper in Italy by number of floors (50) and according to the highest occupied floor criterion (with its 207 m).

Drytech has designed the waterproofing of all the structures below the project ground level. The fire-fighting tanks, the system tunnels, the multi-lancet windows and the lower sections were therefore built with the Drytech Tank technology. 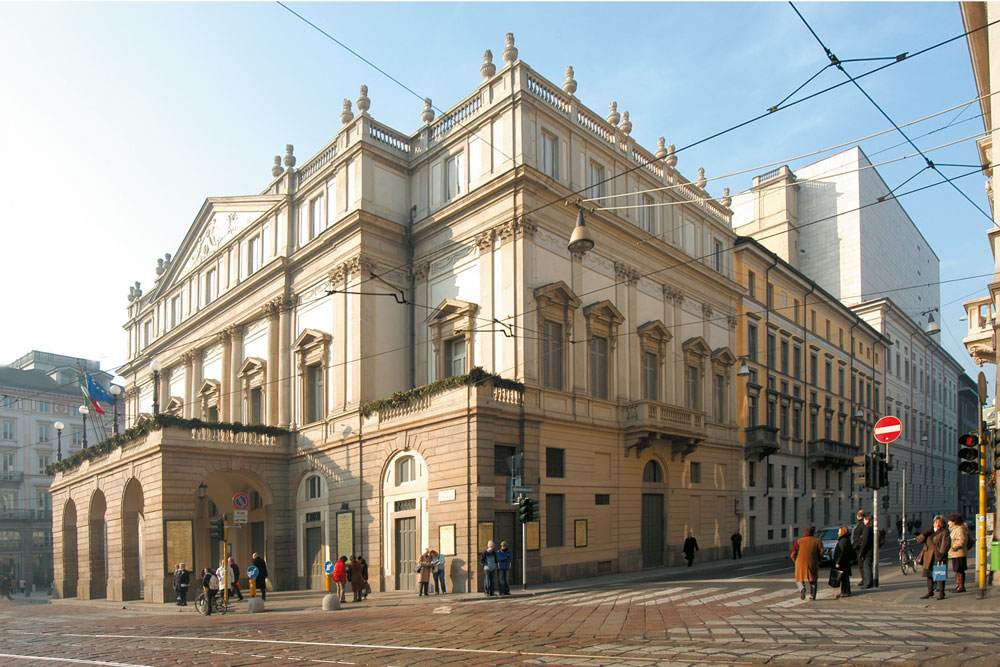 As part of the renovation and expansion of the Teatro Alla Scala in Milan designed by architect Mario Botta, the waterproofing of the scenic pit was carried out, with 850 m² of stalls and 2,500 of walls.

The Drytech Tank System was chosen because it made it possible to waterproof the tie rods of the unloaded floor.

It also saved about 90 days of work for the entire calendar of works because the waterproofing activities are independent and parallel to those of the construction site and are in fact removed from the Gantt chart.

A further saving of time and resources derives from the fact that the elevations of the Drytech tank are thrown directly against the micropiles, making the lining and the wall coincide.

The new stage tower rises 38 meters and the stage pit is 18 meters deep. The new structure behind the stage allows you to manage the sets of 3 shows at the same time.

Sophisticated stage machines allow you to completely change the show in just 6 minutes. 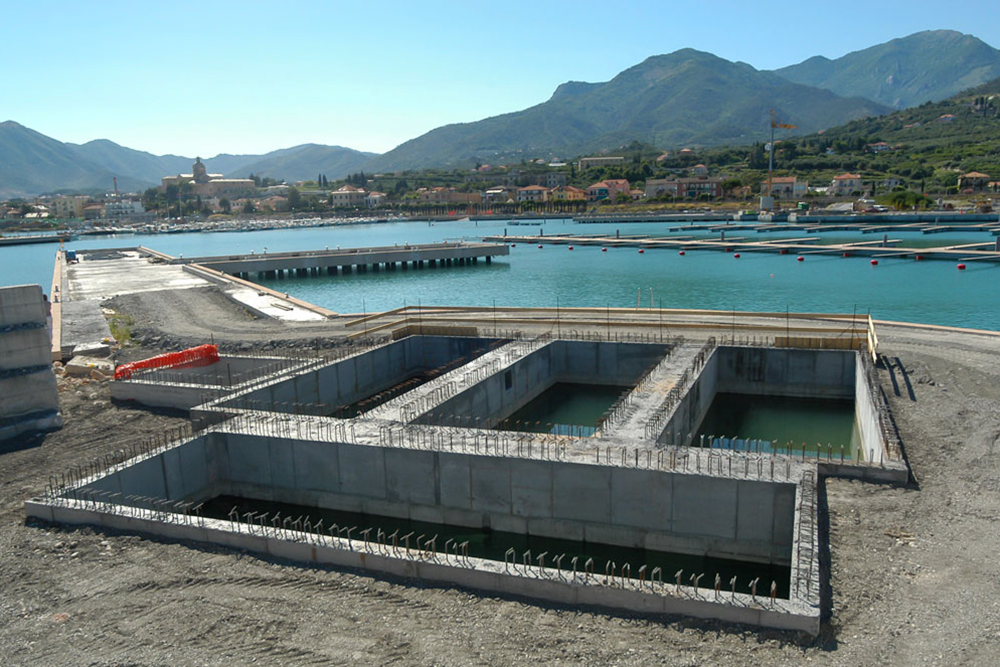 The fuel tanks of the service station of the new tourist port of Loano were built ashore by the company PB Lavori Marittimi of Ancona with the Drytech Tank technology.

The construction of prefabricated tanks has the advantage of a more practical processing and with a higher quality standard, since the jet in water often produces gravel nests, regardless of the expertise and care of the diving technicians.

Where transport does not constitute an obstacle, the prefabricated tank is therefore preferred.

The tanks were built on the dock of the shipyard area of ​​the new port of Loano and Drytech Engineering collaborated with the designer already in the design phase, for the aspects related to waterproofing and the problems of transporting the tanks.

Made of XS2 exposure class waterproof concrete (submerged constructions in a marine environment), the tanks were again injected on the ground with DRYflex acrylic resin, which waterproofed the joints and shrinkage cracks by pressure. We then proceeded to lift and launch by sinking.

The 4 tanks were then welded with a crowning casting. Also this joint, prepared with the DRYset injection channel, was waterproofed for its entire thickness with DRYflex resin. After emptying it was therefore possible to carry out the final testing.

The Drytech Tank as a whole, and the DRYflex resin in particular, must ensure impermeability from aggressive elements such as sea water. 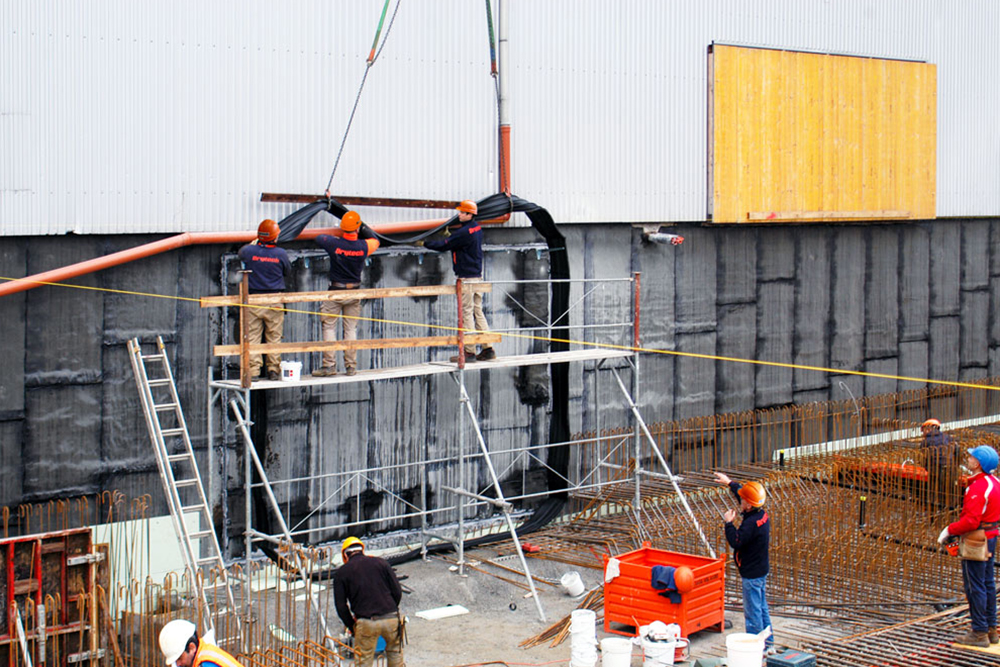 Past and future have finally found a point of contact: the DRYset Injectable Waterstop Tape for movement joints.

The addition of a new body to the building of the Frigerio company in Locarno required the opening of a passage between the existing building and the new one.

The underground connection was made waterproof by inserting a continuous waterstop tape in the movement joint between the two bodies.

The DRYset injectable Waterstop Tape adds to the mechanical barrier function of traditional tapes the possibility of maintaining the joint over time, with possible re-injections of DRYflex expansive resin.

The profile of the Waterstop DRYset tape is in fact equipped with two micro-perforated ducts, through which the waterproofing resin can be injected and re-injected.

The tape was prepared in the Drytech laboratory and subjected to joint tightness tests before installation.

Access to the belt for any maintenance of the joint is guaranteed by cannulae accessible from the intrados of the building.